The O’Connor Technique ™ is based upon the understanding that the overwhelming majority of back and neck pain originates from mechanical spinal problems in which disc material has been physically displaced. The book and this website of the same name, Making Your Bad Back Better with The O’Connor Technique ™, How You Can Become Your Own Chiropractor, by William T. O’Connor, Jr., M.D., describes methods by which back pain sufferers, themselves, can identify the nature of their problem, physically relocate the displaced disc material, and prevent it from dislocating again. In essence, the reader can become their own “chiropractors” by performing various “maneuvers,” which consist of simple to perform, gentle, body movements in specific postures and sequences. By so doing, the displaced disc material can be returned to its normal, anatomical position, thereby relieving the attendant pain. In essence, countless spinal pain sufferers who recognize that their back is painfully “out” can be taught to put it rapidly back “in” with surprisingly little effort.

This website consists of a modified derivative presentation of the original book, Making Your Bad Back Better, so as to make the method available to larger numbers of people who do not have the time or inclination to acquire or study a book. Nevertheless, the author recommends that viewers obtain their own copy of the book because it contains a great deal of information in a format that is better studied and retained for future reference.

This semantic website presentation, “web-book,” was designed to give the viewers an opportunity to determine, without cost, if their back pain appears to be disc-related before purchasing specific directions on how to alleviate the pain. Also, freely presented is a treatise on back pain which provides an overview of the topic, the current state of back pain management in medical practice today, an anatomical discussion of the nature of spinal pain, and a more elaborate description of what The O’Connor Technique ™ offers relative to other back pain programs or available therapies.

The reader of this website is given the opportunity to learn a great deal about back pain without charge. There is a wealth of information presented herein; however, those sections that contain proprietary information, consisting of what the author understands to be information available no where else in the medical literature, can only be obtained at a cost. When an attempt is made to access that information, the reader will be asked to register with a credit or debit card payment prior to gaining access to those sections.

How This “Web-book” Can Be Used

Since there are numerous causes for back pain, it seems only fair and reasonable for you to be able to immediately determine if your type of pain is consistent with the type of pain The O’Connor Technique ™ is designed to address; therefore, by watching and performing the relevant Diagnostic Circumduction video for the location of your spinal pain and finding a correlation with the spectrum of pain you are experiencing should convince you that this website/book is addressing your type of back or neck pain.

From here you can either continue reading the first few chapters of the web-book for free in the following order:

or, purchase a membership subscription to gain access to the full content of the web-book and accompanying instructional treatment videos, which will guide you through the maneuvers of The O’Connor Technique ™.

How This “Web-book” Came Into Being

It could be that Nature’s most efficient means of remedying a painful condition is to afflict a doctor with it. Speaking from experience, without the knowledge I attained I might have been; permanently disabled from my own bad back; addicted to narcotic pain medicines; or have undergone a painful, dangerous surgery – which could not have provided any reasonable certainty that it would have solved my problem; and, ten years later, I statistically would have been no better off than not having had the surgery. Instead, I can now lift heavy objects, play most sports, perform physical labor, sleep comfortably, and I am not in constant, incessant, unrelenting, pain. Most people with bad backs would give almost anything to be able live that reality. In a sense, the development of The O’Connor Technique ™ is more a personal triumph than an academic achievement because I can function for the most part without pain; and when pain occurs I can rapidly stop it.

I did not set out to write a book on back pain. The principle impetus for developing this technique came because I was in pain, and I discovered, to my dismay, that the pre-existing and currently widespread “state-of-the-art” back pain management methods were (and for the most part still are) woefully inadequate. I was forced by circumstance to apply the adage: “Physician–Heal Thy Self.” Having largely done so, in the writing of this material, I can share my hard-found ability to prevent pain and disability by educating people in the art of arresting back pain whenever it occurs as well as protecting and strengthening their spines against future episodes. 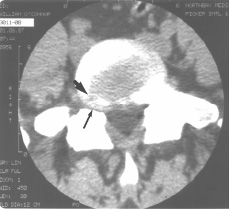 In developing The O’Connor Technique ™ and the mechanical solutions to back pain, I started from the basic anatomy and analyzed it as a mechanical problem rather than a medical one; then, through a combination of common sense, a study of what existing therapies were beneficial in myself, applied intellect, and good old-fashioned trial-and-error using my own back as an experimental model, I arrived at an elegantly simple, perfectly reasonable explanation of the source for what I discovered was a majority of spinal pain.

Working on myself, experimenting by seeing which techniques worked and which ones didn’t, I was able to design and refine the most successful methods of putting my own disc back in place. Later, when I was certain that the effect was not a delusion, coincidence, or some serendipitous result from random activity, I began testing the method on nearly every patient that fit the criteria for a disc problem in my practice. I soon began to achieve very gratifying results in others. People were being helped immediately. They would come into the office bent over, in terrible pain, and nearly unable to move; then, they would leave walking upright without the pain. Carefully selecting patients with disc symptoms upon whom I could test the technique and very carefully using my technique to re-position their discs, I became convinced that this constituted a novel approach to the management of back pain that was predominately successful. As the technique evolved, more and more people were getting beneficial results. If one technique didn’t seem to work, I re-examined the problem and altered the technique so as to be able to fine tune it to focus upon the specific areas of pain in the back or neck. I studied what motions and movements were successful in my own back and neck then utilized them whenever patients complained of the same symptoms.

Later, I developed the means to avoid any active manipulations on my part. I was able to limit the clinical activity to those motions that the patients could reasonably have accomplished themselves with normal exercise-type movements. This insured that I did not induce any harm that would not have otherwise reasonably been assumed to have been inevitably occasioned by a return to normal activity. Persons with back pain were quickly assessed to rule out a neurosurgical lesion, then they were directed through The O’Connor Technique ™ “MANEUVERS”. If they got relief, they could be assumed to only have had a disc as the problem because that was the only anatomical area being changed through motion. It came to be so successful and non-traumatic that, if it didn’t give nearly immediate relief, I then had evidence to conclude that the problem was probably not disc-related, and I looked for an alternative source of pathology. Since the pain was so easily remediable by this method, which only works on the discs, I also soon found that an extraordinarily high percentage of back pain was attributable to disc pathology.